In the race to be more sustainable, how do the Olympics compete?

Have officials learned from decades of negligence that’s marred the Olympics for decades? Will the Tokyo Games in 2020 finally turn it all around? 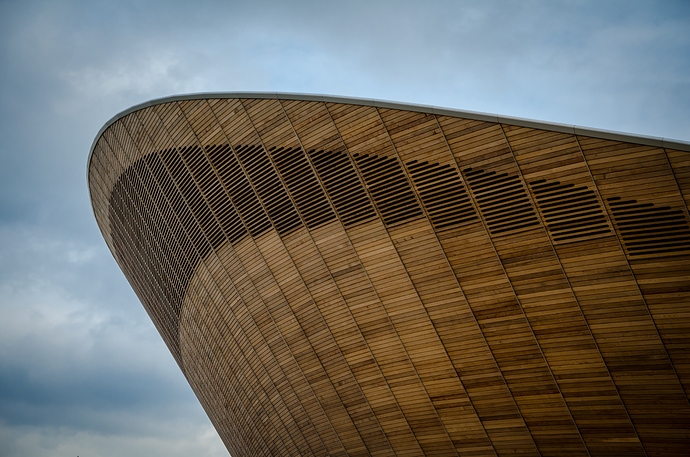 It’s hard to believe, but another two years have elapsed since the Olympics. Televised in the U.S. for the past sixty years, as a country we all anticipate both the Summer and Winter Games as a way to rekindle the spirit of dedication and perseverance. We try to catch the Opening Ceremonies to grab a rare glimpse at what it looks like when the entire world comes together in respect, honor, and competition.

But all that spirit comes at quite the cost.

Whether you briefly dip into Twitter, news headlines, and video highlights to keep up, or you dive deep and DVR all your favorite events, the Olympics are definitely an unavoidable extravaganza. And definitely not without their controversy.

Not always about the politics and the athletes, many of the Olympics-related controversies stem from the parks and projects themselves. While hosting the Olympics promises a chance at infrastructure modernization and a boom of tourism, it is not without its hefty price tag. Many argue that, despite a decade of planning, the Olympics will always put its host cities into debt. To renovate and construct multiple sports complexes, facilities, and residential spaces that will house some half a million visitors for about a month is obviously quite the endeavor with plenty of room for mistakes, mishaps, and even gross negligence.

Not just the fault of the host cities and their governments, many argue that it’s the International Olympic Committee (IOC) itself that has struggled to improve the overall hosting model and sustainability guidelines –– from the bidding process and construction to dismantling and reutilization. It’s no surprise that, today, far fewer cities have bid (and more have pulled out of their bid) for their chance to host.

With that said, since the 2004 Summer Games in Athens –– a project that some argue played a major role in the economic collapse of Greece –– officials, organizers, developers and participants have attempted to build a more sustainable “Olympic Legacy” model of hosting. Has it worked? You be the judge.

Let’s take a brief look at four of the most notorious (and expensive) Olympics hosting projects over the recent years, and then take a glimpse into the dramatic changes Tokyo will make for the 2020 Games. 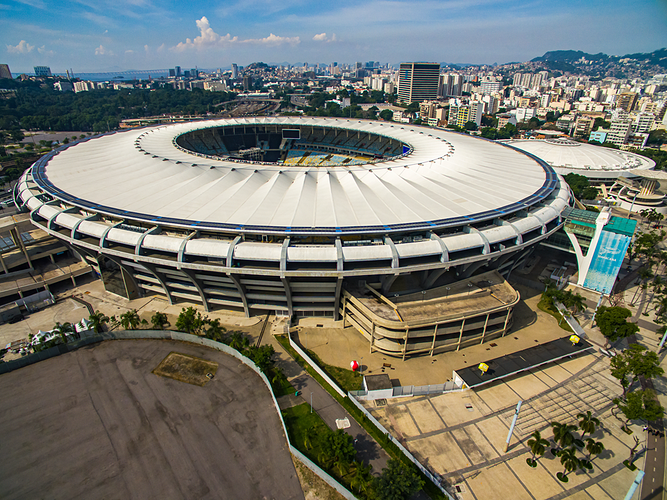 While Rio’s Maracanã Stadium –– opened in 1950 and used in various sporting events like the FIFA World Cup, as well as hosting giant acts like the Rolling Stones, Madonna, and Paul McCartney –– was repurposed for the 2016 Summer Games, reports claim that Olympics-related renovation and new construction still cost the country at least $13 billion.

Not too long after athletes and tourists vacated the city, many of the Olympic structures were torn down or abandoned and left to disrepair. Even Maracanã Stadium was closed from tours just six months after the Olympics due to vandalism and looting. Already suffering from a terrible recession and crippling debt, this was just another black eye to the community.

But despite political and economic unrest, many of Brazil’s political figures and citizens still claim that the Games helped pull the country together and that media coverage exaggerated their problems. Rio’s former Mayor, Eduardo Paes, took particular pride in Boulevard Olimpico, a port district of Rio which was transformed from an ugly crime-ridden overhead expressway to a vibrant street market of food trucks and artists that visitors still tour today. According to travel website reviews, tourists review this area as safe, friendly, and filled with beautiful murals and shops: a brilliant way to repurpose land and facilities post-Olympics. 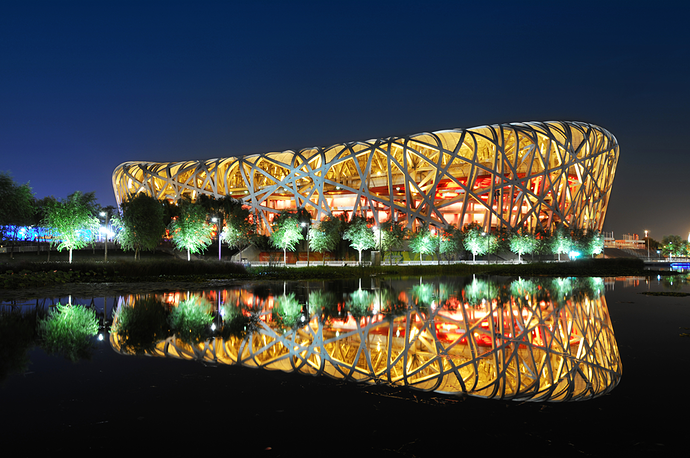 Over the past decade, venue owners of the Beijing National Stadium (aka The Bird’s Nest) have attempted, but failed to establish the former-and-future Olympics facility into a shopping and entertainment complex. In addition to the 2008 Olympics and Paralympics ceremonies and athletic competitions, the stadium has hosted a wide array of events like football and eSports championships, monster truck racing, opera, pageants, and Korean Pop concerts. But it’s tough to fill a stadium with a capacity of 90,000 people. Many events with attendance that top out at 10,000 have opted out of using the enormous space.

Designed in 2003, by Swiss architecture firm Herzog and de Meuron, reported construction costs totalled over $400 million. From a “green” perspective, construction of the stadium included a 24-hour-per-day rainwater collector to distribute purified water throughout and around the building. A pipeline under the field uses advanced technology to help naturally heat and cool the stadium. Currently, the venue only exists as an attraction for tourists to marvel, as there are no amenities nearby. It also costs about $10 million annually to maintain.

But the enormous space is scheduled to be used again in two years during Beijing’s 2022 Winter Olympics and Paralympics. With an estimated budget of $3.9 billion –– less than one-tenth of the $43 billion spent on 2008 Summer Games (the second most expensive Olympics project in history) –– Beijing Olympic officials have been challenged to repurpose much of the pre-existing infrastructure. Having overextended themselves 12 years ago by $35 billion, expectations to come in at budget are low. But, just like 12 years ago, the Chinese economy is immense, and, unlike Greece, the impact of debt from the Olympics is small.

For the past decade, the Chinese government has also pushed pretty hard for development in winter sports through incentives and tax exemptions in order to stoke more interest and investment. Boasting an increase from 100 to 600 ski resorts in just a few years (up from a mere 11 resorts in 1996), visitors to these resorts tripled from 5.5 million in 2009 to 15.1 million in 2016, and continues to boom.

Perhaps this new winter sports obsession will help China maintain any net-new structures, facilities, and transportation well-past the conclusion of the 2022 Games, and avoid controversies, like reports of the displacement of 1.5 million Chinese residents to make way for Olympic venues. 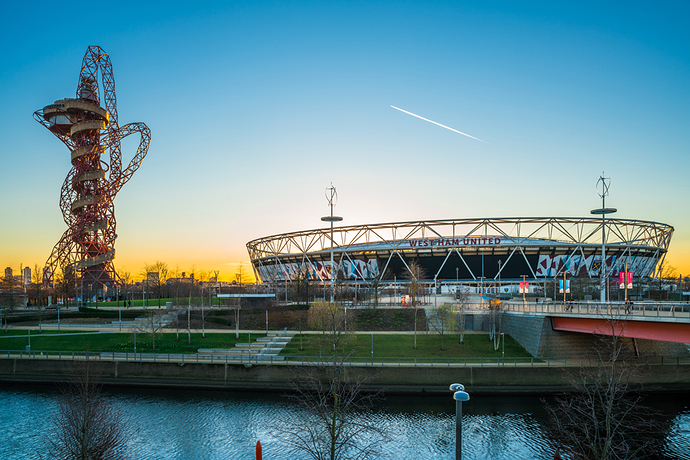 In London’s case, to host the Olympics also meant the displacement of residents and businesses. But with high hopes and in “Olympic Legacy” style, officials promised a post-Games revitalization of the East End area with new employment, recreation, and housing opportunities.

Interestingly enough, the planning, design, and development of this area of London was already underway during Olympics bid phase back in 2005 (the “Stratford City Project,” launched in the late 1990s), and officials claim that this galvanized the community to improve the area, even if the city hadn’t won the Olympics bid.

Aesthetically –– especially compared to the community that once lived there –– critics think of the Stratford area as a “socially cleansed,” dull, impersonal, almost alien village dropped from space. On the other hand, many applaud the revitalization from “wasteland to urban oasis.” Eight years later, unlike other Olympic Villages, the Stratford area booms with shopping, housing, parks, recreation, and other community facilities, all clean, safe, and secure, albeit privatized. Many argue that the gentrification of this area has only benefited the lives of the middle class, rather than the working and immigrant classes who originate in the area.

This begs the question: to whom exactly is the “Olympic Legacy” gifted? When it comes to true sustainability, does it matter who gets to enjoy a revitalized area, as long as someone is there to enjoy it? 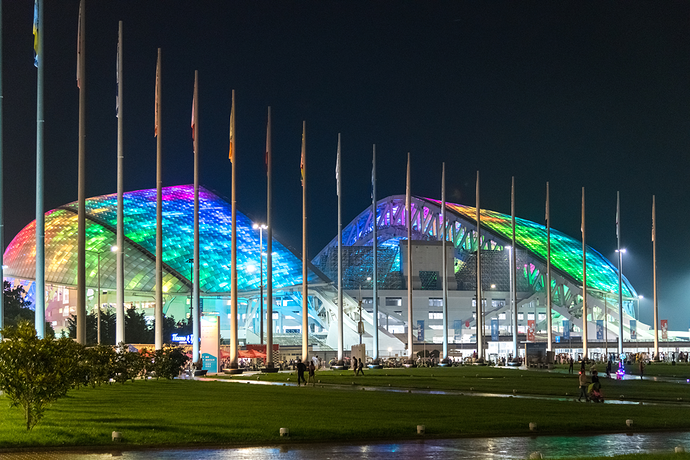 As the most historically expensive Olympics Project to date at $50 billion, the Winter Games in Sochi were also arguably one of the more controversial in recent memory. Political corruption, human rights and doping scandals aside, some of the biggest headlines hit on the quality (or lack thereof) of the construction and accommodations.

Upon arrival, journalists and athletes complained of getting trapped in unfinished hotel rooms, “dangerous” dirty brown water, exposed wires, uncovered manholes, and an abundance of stray dogs. From frightening truths to overblown rumors, the overarching theme even before the Games began was that Russia wasn’t ready.

With no pre-existing structures, nor much foundation available in the resort town of wetlands-meets-national-park, Russia had to start from scratch and build quickly, and –– as critics say –– at the expense of the surrounding environment and wildlife populations. While official reports of damage remain a mystery, it’s easy to see how laying asphalt and concrete over wetlands, tunneling through 30 miles of mountainside, illegal waste dumping, and the destruction of the national park and its ecosystem could prove to be a wasteful effort, especially if few use, reside in, or visit the area post-Games, as is reportedly the case. While Russians continue to vacation in the resort town, their role as Olympic hosts failed to allure an international tourist base. Many of the Olympics’ events structures sit dormant, partially dismantled, and abandoned. 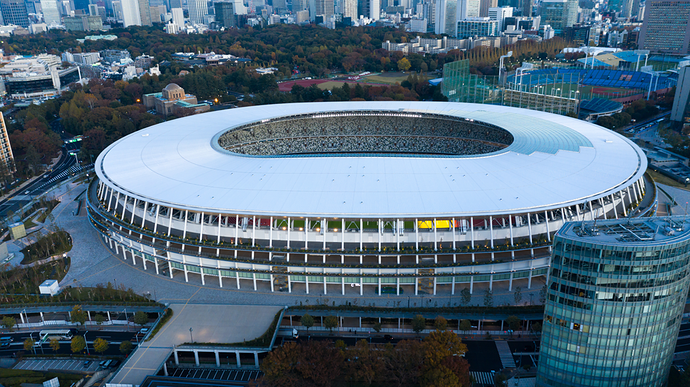 In the true spirit of the “Olympic Legacy,” Tokyo has committed to a more sustainable Olympics, not just in 2020, but far beyond their turn at hosting the Games. With the help of the International Olympic Committee’s renewed efforts and concerted guidance, Tokyo established an official Sustainability Concept with the slogan: “Be Better, Together – for the planet and the people,” which outlines an abundance of meticulous and impressive goals to Go Green for this year’s Summer Games.

Just a few examples of their efforts: utilize pre-existing buildings and transportation, use 100% renewable electricity, and organize a carbon-offset program. So far, seven Olympic event venues are equipped with renewable energy systems to utilize solar power, solar heat, and geothermal heating/cooling systems. Various facilities, Torch-Bearer uniforms, Ceremony podiums, and even the Olympic medals themselves will be constructed of recycled materials (like discarded phones and other electronic devices for the latter). Tokyo aims to reuse and recycle at least 65% of the waste generated during the games. And in accordance with the “Operation BATON” project, the entire Olympic Village will be constructed using sustainably sourced timber donated by locals, which will then be returned to communities to be reused after areas of the Village are dismantled.

In 2019, Tokyo reported successful efforts thus far, but only time will tell how those efforts pay off, if they hit their projected targets, and whether or not they become the sustainability model for Green Games to come.

In an attempt to establish a more sustainable model, how will the Olympics compete in the future? Have officials learned from decades of negligence, overspending, and even corruption? How will host cities, participants, and Olympics officials continue to work together to reduce waste, improve the environment and community, and repurpose structures to avoid neglect and abandonment? Will the Tokyo Games finally turn things around for the Olympics by leaving behind a successful proof of concept and a true Olympic Legacy?

We want to hear more from you! What are your thoughts about modern architectural revitalization and sustainability in Olympic host cities? How would you improve the Olympic Legacy? Comment below or tweet at us!